The GRX (known as the E-RX in the original Japanese manga) is featured throughout the Speed Racer franchise, most prominently in the original 1967 animated series and the 2008 live-action film directed by the Wachowskis.

The GRX appears in the two-part episode "The Fastest Car on Earth". It is an extremely powerful and dangerous racing engine designed and built by automotive genius Ben Cranem. It could reach velocities so high that it negatively affects the driver's sense of coordination. Ten years prior to the events of the series, it took the lives of five test drivers, with Cranem himself being one of them. The GRX had gained notoriety from these events among automotive experts, Pops Racer included. Five years after the crash that had killed Cranem, the engine was buried with the body of its creator at the Spook Cemetary. In Part 1, the GRX was unearthed from Ben Cranem's grave by Oriana Flub and her subordinates, who intended to use it to win the Grand Prix of the Orient. The engine was installed in a sleek, golden car, which she entered in the race.

She uses a special formula on her hired drivers, known as V-Gas, which artificially sharpens the user's reflexive nerves for faster responsiveness while suppressing all fears of speed. However, V-Gas has two nasty side effects; The first is that it makes the driver extremely thirsty to the point of desperation, but the second is much worse; If the formula wears off on its own, or if the user drinks water while under the influence, they suffer debilitating case of tachophobia.

Pops is familiar with the GRX, and had even recognized the distinct sound that the engine made when the car was first taken for a test drive at the track. Seeing the threat posed by the engine to the safety of the racing drivers, he intended to destroy it as he should have done when it was first built. He had even tried to convince Oriana Flub to hand it over to him to no avail.

After brawling with Curly Cranem, the son of Ben Cranem, Speed gives in to temptation as he gets into the driver's seat, start the car up and then drive off from Oriana Flub's lair. However, as Speed went faster, the engine's immense horsepower took its toll on him and he loses consciousness at the wheel. Thankfully, Pops, Spritle and Chim-Chim were able to rescue Speed in time. After a driver named Louis Towcar lost control of the GRX during a time trial when he drank some water out of desperation from his exposure to V-Gas, Speed was offered a chance to drive the car by Oriana. He was given V-Gas as he then drove the car around the track. Trixie, Spritle and Pops intervened before anything bad could happen. On the way home, however, Speed was subjected to tachophobia when he drank some water.

With helpful advice from Pops, Speed gets over his fears during the Oriental Grand Prix, where Curly is the new driver of the GRX-powered car. As with the previous drivers before him, he takes V-Gas to endure the terrific speeds of his father's dangerous creation. However, he became desperately thirsty on his 27th lap and drank some water at the pit stop. When he continued driving from there, he develops tachophobia and loses control of the car as he then died in a horrendous crash.

The GRX engine is depicted as a V-block engine, and features its initials on the cylinder heads.

The car that is powered by the GRX is a sleek hardtop coupe built in a right-hand drive layout. It has a pointed front end like a spear head, and featured headlights like the narrowed eyes of a predatory animal. It also has power windows, along with a dragster-style parachute that was deployed during its first test run at the track. In the English dub, it is referred to as the GRX after the engine, but in the original Japanese version, the car is known as Great Kuron.

The Return of the GRX

In the 2008 film, the GRX (#66) is a T-180 race car developed by Royalton Industries and driven by Jack "Cannonball" Taylor. Already a fierce car, it became even fiercer as Arnold Royalton secretly installed a spear hook (illegal in WRL regulations) on the vehicle for the final race of the season, the WRL Grand Prix. In the end however, Taylor failed to beat Speed Racer let alone take him down, as the latter flipped both their cars and exposed the weapon to the track cameras, causing the GRX to crash and disqualifying Royalton.

The GRX also appears in the tie-in video game based on the film, once again driven by Cannonball Taylor.

The GRX race car is powered by a next-generation Longitudinally-Mounted Transponder (LMT), which is developed by Royalton in collaboration with Musha Motors. Cast of materials mined from the lunar surface, the inter-positive transponder is a significant step-up above anything equipped with a positive displacement supercharger in terms of horsepower and performance. The vehicle's wheel wells feature a totally redesigned version of the T-180 joint system, dubbed "T-360", in which the wheels can swivel a full 360 degrees. A series of exhaust billows by Jonchee independently recycle excess thermal energy, which when combined with two dozen ground effect channels carved into a single-forge body system, puts the car "on a road that might be better suited for space travel". All of these features make the GRX the most technologically advanced racing car of its time. Of course, it also has the T-180 standard jump jacks. It was confirmed by Royalton that the GRX is able to reach speeds of 800 km/h (Equivalent to 497.20 mph).

A close-up of the GRX engine (note "GR-X" on the cylinder head).

GRX car.
Add a photo to this gallery

The Return of the GRX

Cover for The Return of the GRX Vol. 1

Cover for The Return of the GRX Vol. 2
Add a photo to this gallery 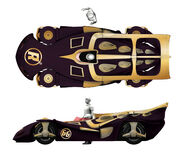 The GRX, as seen in the video game.
Add a photo to this gallery
Retrieved from "https://speedracer.fandom.com/wiki/GRX?oldid=10006"
Community content is available under CC-BY-SA unless otherwise noted.