Speed Racer Jr. (simply known as Speed) is the main protagonist of Speed Racer: The Next Generation. He is the long lost son of Speed Racer Sr. and is X Racer's younger brother. He drives the Mach 6 and dreams of becoming a legendary racer, while also bringing gasless technology to the world.

Speed Jr. is the second son of the original Speed Racer from the 1967 Japanese anime series. Speed grew up in an orphanage for the majority of his childhood. His parents had left him a special key and a red ascot, both of which he kept with him. He is often awkward and shy, but being behind the wheel brings out the best in him. Speed's skills on the racetrack are on par with those of the top ranking students at the Racing Academy. Despite his amazing talent, he is generally quite modest about his abilities and claims that his maneuvers are a result of instinct rather than skill. He is not in it for money or fame - he just wants to be "the best racer in the world", to have fun, uphold his father's legacy, and live a peaceful life. 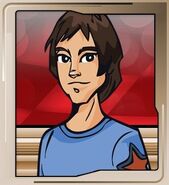 Add a photo to this gallery
Retrieved from "https://speedracer.fandom.com/wiki/Speed_Racer_Jr.?oldid=10786"
Community content is available under CC-BY-SA unless otherwise noted.